I truly admire Josh Sundquist. And no, it is not because he is a Paralympic athlete (I’ve been there) and a motivational speaker. (I’ve done some of that) The reason I admire Mr. Sundquist is more simple than that.

This is a man who truly accepts who he is.  He doesn’t hide his disability, he is not ashamed of it.  On the contrary, he sees it as something to celebrate.  Every year I  eagerly anticipate seeing a picture of his Halloween costume. Every year I am convinced he cannot be more creative with his costume than he has been previously.  And every year I am wrong.  This year, he has dressed up as an IHOP billboard.  He has one leg, geddit?  Sometimes I wish I was this brilliant.

The following is a story about him from Yahoo News:

Give up now. A Paralympian with one leg has once again managed to gloriously outdo himself in the high-stakes Halloween costume contest — knocking out everybody else in the process.

This year, Josh Sundquist is a blue IHOP sign, inspired by the US pancake restaurant chain (the acronym stands for International House of Pancakes).

His disguise is so good, in fact, it’s easy to mistake it for just a large advert. Until Sundquist bounces. 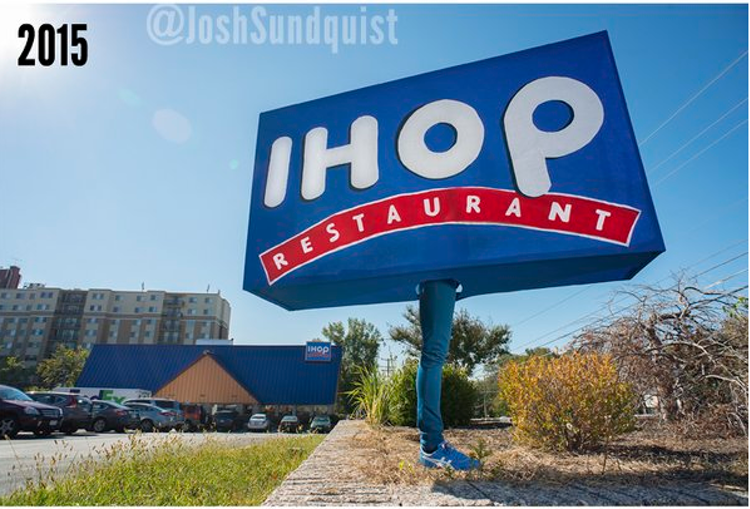 The 31-year-old amputee debuted his hysterical 2015 outfit on Twitter with the catchphrase:

And that, he certainly has done.

In previous years, he dressed as a flamingo after noticing on a zoo outing that the pink birds “look like me doing a crutch handstand”.

Look closely and you’ll notice he is athletically perched upside down on his crutches, with his head bowed as the bird’s tail and legs bent into the shape of a head and neck. 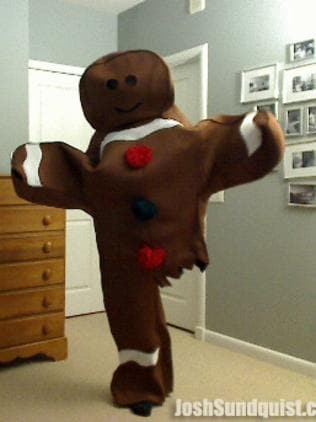 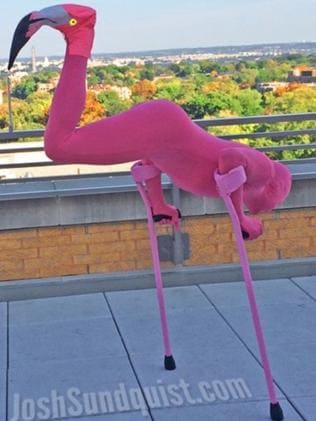 He has been the Gingerbread man from Shrek, whose leg is gobbled up by the evil Lord Farquaad.

He turned himself into the fishnet-wearing leg lamp from movie A Christmas Story. And he also has taken up a suggestion from a YouTube subscriber, becoming a foosball player. 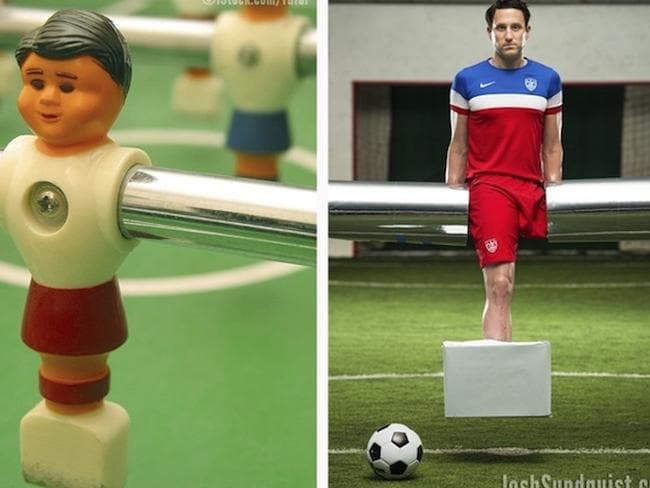 No, it’s not what you’re thinking — Sundquist insists he has not become a sellout.

Rather, he says the brand’s name is a classic amputee joke (IHOP, geddit?). So he challenged himself to bring it to life.

The newlywed, who is now a successful author and motivational speaker, lost his leg to a rare form of bone cancer when he was just nine years old.

He was fully cured at age 13 but he remained self-conscious about his disability through his teen years — until his stellar sense of humor took over.

“In high school, I wore a prosthesis all the time and didn’t want anyone to find out I was missing a leg. But now I’m more comfortable with who I am and what I look like,” Sundquist explained on his website.

“With these Halloween costumes, you could even say that I celebrate what makes me different. Which may be either weird or refreshing, depending on your perspective.” Sundquist wrote that the annual amputee costumes are born from a joint creative effort between him and his assistant.

“We toss around ideas for a few months about different costumes and how they could be constructed,” he said.

Interestingly, Sundquist didn’t become a Halloween enthusiast until he started at university and dressed up for the first time on October 31.

In his youth, his family preferred to lock all doors and flick off the lights so no kids would come knocking for trick-or-treating.

And boy, is the internet glad he decided to join the dark side.